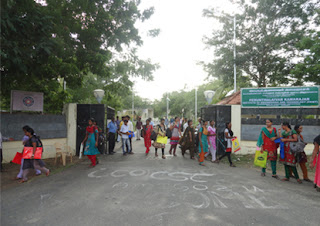 The Union Territory of Puducherry constituted of the four erstwhile French establishments of Pondicherry, Karaikal, Mahe and Yanam. In September 2006, the territory changed its official name from Pondicherry to the aboriginal, Puducherry, which means "New village"  in the Tamil language. Puducherry and Karaikal are situated on the East Coast in Tamil Nadu, Yanam in Andra Pradesh and Mahe on the West Coast in Kerala. The territory has a total area of 492 km²: Puducherry (city) 293 km², Karaikal 160 km², Mahe 9 km² and Yanam 30 km².

A wide range of educational Institutions right from the elementary level to collegiate level are present in the Union Territory of Puducherry.  The growth of literacy in Karaikal is also at better level. Besides, National Institute of Technology-Puducherry (NIT-P), Karaikal, the Government runs (i) two Arts and  Science Colleges,  (ii) two Polytechnic Colleges, (iii) one College of Education and (iv) one Agriculture (PAJANCOA & RI) in Karaikal region.  Also, there are two Engineering Colleges, and one Medical College and Research Institute run by private managements in Karaikal.

>>> One-day National Workshop on Basics in Design in Biomedical Instrumentation was conducted on 4th Jan 2023.